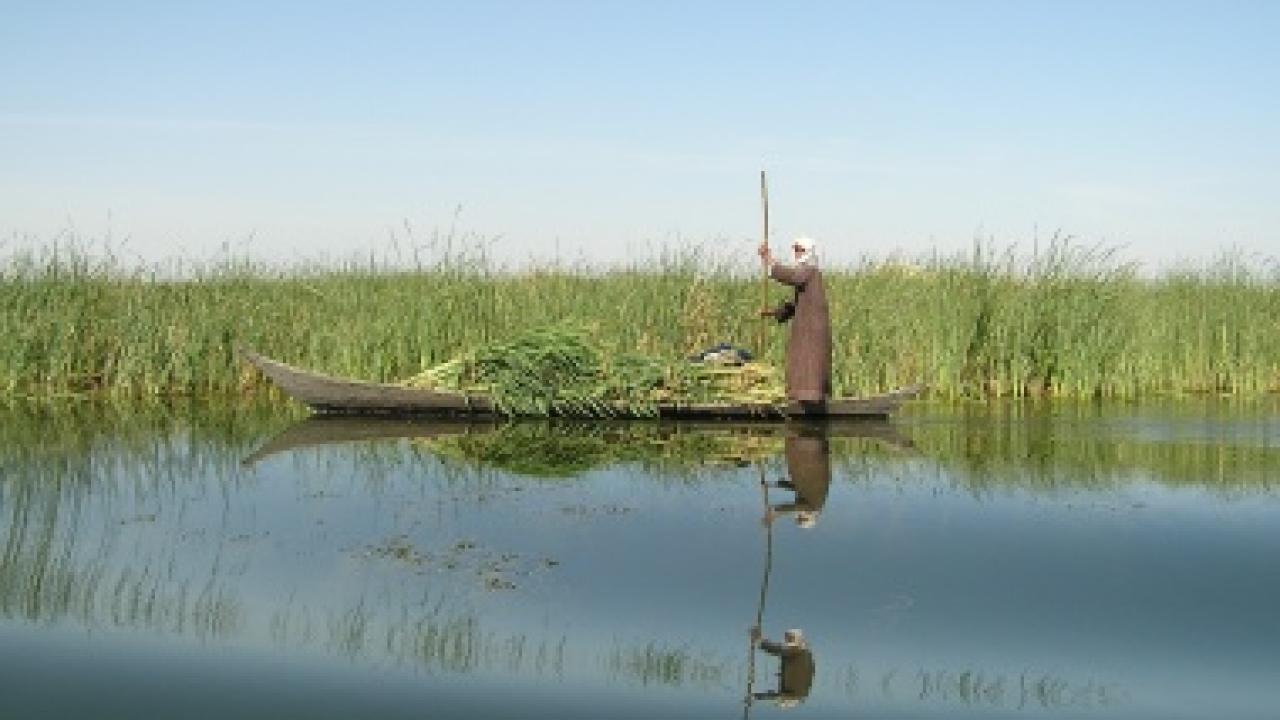 How can a simple game represent a complex social-ecological system?  For the last few years, I have taught a graduate class on social-ecological systems (SES) that introduces SES concepts and frameworks along with delving into a number of related topics in environmental social science. A core activity of the class involves student groups choosing SES case studies, and applying the course topics from a particular week to the case study. Over the years, student groups have come up with creative participatory SES games as an alternative to top-down presentations.  The Winter 2016 students took participatory games to the most advanced level yet—all four student groups created games representing their SES case studies. They focused on four case studies:  multiple stable states in the Mesopotamian Marshes, the evolution of networks in international climate agreements, multi-level cooperation and biosecurity for zoonotic disease, and land-use decisions in dry tropical forests. The .pdf file at the end of this blog has a more complete summary of all the SES games, as well as a nascent framework that identifies key elements across games.

While designing an SES game was not a formal class requirement, there is obviously a strong desire for this type of learning activity. We collaboratively wrote this blog (yes...it is almost a paper....) in order to memorialize and share the lessons learned from our experiential learning class.  The overarching challenge is how to create a participatory game that adequately represents key aspects of SES, which are usually considered complex adaptive systems. Games needed to be simple enough for participants to understand and engage within a single class period, while still teaching ideas about complex social and ecological processes. The rest of this blog summarizes the outcomes of class discussions, with an eye toward generating a “design studio” for creating SES games. The current content of the blog represents brainstormed ideas and reflections, rather than in-depth research.

Why Use Participatory SES Games?

Lectures are boring. That is the first reaction of many students, and resonates with the broader movement towards more engaged and experiential learning that is happening throughout academia.  A mainstay of the engaged learning movement is that participatory exercises appeal to a variety of learning styles.  Some participants are capable of digesting more “top-down” presentations, while other students learn better via “bottom-up” interactions. Games build participatory space for all class members to engage (rather than selecting for extroverts) and provide memorable learning experiences.

When paired with case studies, SES games contextualize theoretical concepts in a more concrete manner.  They allow players to "inhabit" complex systems. Such experiential learning engages with different parts of the brain and creates an emotional reaction and personal, albeit hypothetical, experience that may enhance long-term learning. Through “learning by doing” (being presented with a challenge, having to make a decision, and receiving feedback on that decision) people are able to retain knowledge at a higher level.

Further, SES games serve a variety of purposes, ranging from an ice-breaker that builds trust and empathy, to stimulating discussion about core SES challenges, to providing a concrete simulation of specific SES management decisions. SES games may also identify innovative, outside-of-the box solutions to SES challenges that could not be discovered through traditional approaches. Participants can experiment with a number of different approaches, without failures leading to permanent ecological, economic, or political consequences. The game itself may be played from multiple starting points, or under various conditions, to simulate how different policies (or other SES variables) produce a range of outcomes.  Hence, SES games have the potential to provide a platform for experimental testing of hypotheses.

SES games may appeal to a broad set of audiences ranging from students, to the general public, to policy stakeholders. Hence, SES games have the capacity to become a tool for community development and collaborative governance. There are already examples of development programs and scientists using games to facilitate discussions about climate change or fisheries management, and a number of research groups have developed SES games.  A good example is the RESORTES game created by Speelman and colleagues.

What Makes a Good SES Game?

Throughout the social sciences, participatory games and simulations have become a regular diet of graduate/undergraduate education, and also stakeholder engagement.  Hence, some of the features we nominate below are common to many policy games, such as environmental negotiation scenarios and behavioral social dilemma experiments.  But SES games are differentiated by incorporating features of SES frameworks, such as those posed by Elinor Ostrom and others.  This includes the fact that SES are complex adaptive systems governed by feedbacks within and between social and bio-physical processes.

Given our initial experience, SES games should include the following features:

Despite the prototype stage of these games, the students identified a number of potential pitfalls worth considering for future SES game development. Most of these concerns are not unique to SES games, but rather are issues that should be considered for any participatory game.

Are SES games externally valid?  Can game participants truly understand the decision-making incentives of actors who have spent years in specific roles, with knowledge and preferences linked to the details of a specific SES context?  Can the payoffs embodied in games really provide the same incentives for decisions that in the real world may be linked to large amounts of money or other resources, or have direct consequences for human welfare? Can the small groups that participate in games scale-up to the large groups that participate in real SES?

Because they are anchored in complex systems, SES games can be difficult to understand.  There are many different types of players, each of which may have different decisions and payoffs.  The ecological processes that translate decisions into outcomes could also be complex, especially when mixed with external shocks or other uncertainties.  To potentially reduce this complexity, the SES games might be designed to illustrate one or a select few SES phenomena rather than trying to capture all of the different aspects of an SES into one game.

Can you make SES games a stand-alone game that could be played with on-line or other materials, or do you need some type of skilled facilitator?  Ideally, an SES game could be put together as a whole package including materials, rules, research questions for students and other pedagogical tools.  In some cases a skilled facilitator may be required to instruct participants on different complex aspects of the SES game.

How can we tailor SES games to different audiences and purposes?  An SES game designed for undergraduate students may not work equally well for community engagement, where the stakeholders might think the SES game is too abstract or “cartoonish” or stakeholders have a different level of technological sophistication.  For example, stakeholders in some developing countries might not be comfortable working on a computer.  While some SES games could be designed purely to stimulate discussion (such as the Edge of Chaos in Mesopotamia), others might have well-defined payoffs and could actually provide the basis for experimental testing of theoretical hypotheses.  We expect a portfolio of different types of games is the most likely outcome.

SES games are potentially powerful learning tools for students, communities and stakeholders. They engage different styles of learning in order to illustrate core processes that drive complex social-ecological systems.  However, they are not easy to design and require extensive testing.  Creative and energetic students are the perfect candidates for working in a SES game design lab.