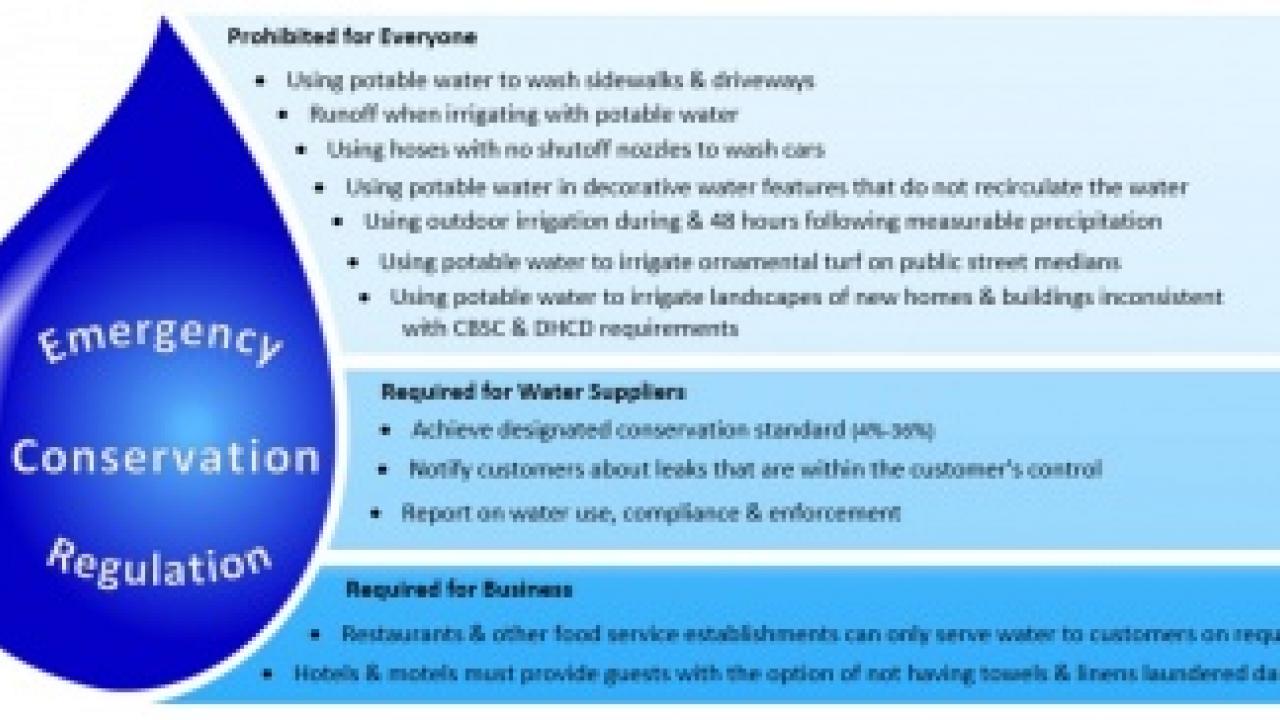 The 2016 Emergency Conservation Regulations: The Moral Hazard of Mandatory Measures

On May 9, 2016 the State Water Resources Control Board (SWRCB) announced new emergency water conservation regulations applicable to urban water suppliers throughout the state. These regulations replace the 2015 rules, which required every urban water supplier to reduce water use by a certain percentage as determined by a SWRCB formula.  Many urban water suppliers complained that the 2015 state targets did not sufficiently account for local water circumstances, and that complaint has grown even louder because the 2015-16 water year brought more precipitation especially to Northern California.  In response, the new 2016 rules require urban water suppliers to "self-certify the level of available water supplies they have assuming three additional dry years, and the level of conservation necessary to assure adequate supply over that time."  The fact sheet provides a useful example, "If an individual water district projects it would...have a 10 percent shortfall after the next three years at the current rate of use, their mandatory conservation standard would be 10 percent."  In addition, the emergency regulations require urban water suppliers to report their water use and prohibit certain wasteful water uses like watering down a sidewalk with a hose instead of a broom or brush.

Some media outlets have described the 2016 regulations as the end of mandatory conservation.  However, this is mischaracterization that deflects attention from analyzing what the new regulations really do.  Yes, the regulations have changed and they are not as strong as the 2015 regulations--they have been "relaxed" and many cities may face less severe water conservation targets.  It is completely fair to ask whether the new water conservation targets will be sufficient in the face of climate change and the potential that the next three years will be dry.  It is also fair to ask whether local suppliers will use sound methodologies to produce their assessments. But it is not fair to say these are not mandatory measures--urban water suppliers are still being required to take actions.  Even relaxed requirements are still requirements.

In terms of analyzing these new rules, so far observers have failed to note that the self-certification requirements of the new regulations create what political economists call a "moral hazard" problem. A moral hazard problem occurs when an agent (urban water supplier) has private information about a decision (amount of local shortfall in three years) that is not available to a principal (SWRCB) who is asking the agent to perform some action (conserve water).  In a moral hazard problem, the agent has an incentive to act in their own self-interest (avoid costs of water conservation) to the detriment of the interests of the principal.  Hence, when asked to self-certify, urban water suppliers have an incentive to project lower shortfalls in three years than might be warranted.  For example, if some type of hydrological model produces a range of 3-year shortfall estimates ranging from 10%-30%, the urban water supplier has an incentive to choose 10% in order to minimize the amount of conservation required.  In theory, the SWCRB does not have enough information evaluate the accuracy of the self-certifications because that is what the urban water suppliers were complaining about in the first place--the 2015 SWRCB formulas did not adequately account for local circumstances.

Another way to analyze this is to engage in the thought experiment where to address the drought, the SWRCB promises to build new water storage and conveyance facilities that will use public funding to provide urban water suppliers with enough water to cover the shortages that would occur from three more dry years.  To do this, SWCRB asks each urban water supplier to estimate how much water they need.  In this case, the urban water supplier is likely to choose the highest estimate because all of the costs are borne by the principal (SWCRB), not the agent.  To mitigate these problems, it is important for the SWCRB to ward against moral hazard by reducing the amount of information asymmetry and insuring the methods by which urban water suppliers are estimating shortfalls are transparent and take into account all of the correct information and variables.

These recent policy changes highlight how important it is really analyze how different types of rules affect the decision-making incentives of the involved actors.  That is the heart of policy analysis.  Media discussions that simplify the situation into "mandatory" versus "not mandatory" are likely to miss important nuances.  Admittedly, it is often difficult to report on the nuances in a way that appeals to the general public, but all commentators need to pay attention to what these types of policy changes really mean to the future of California water.