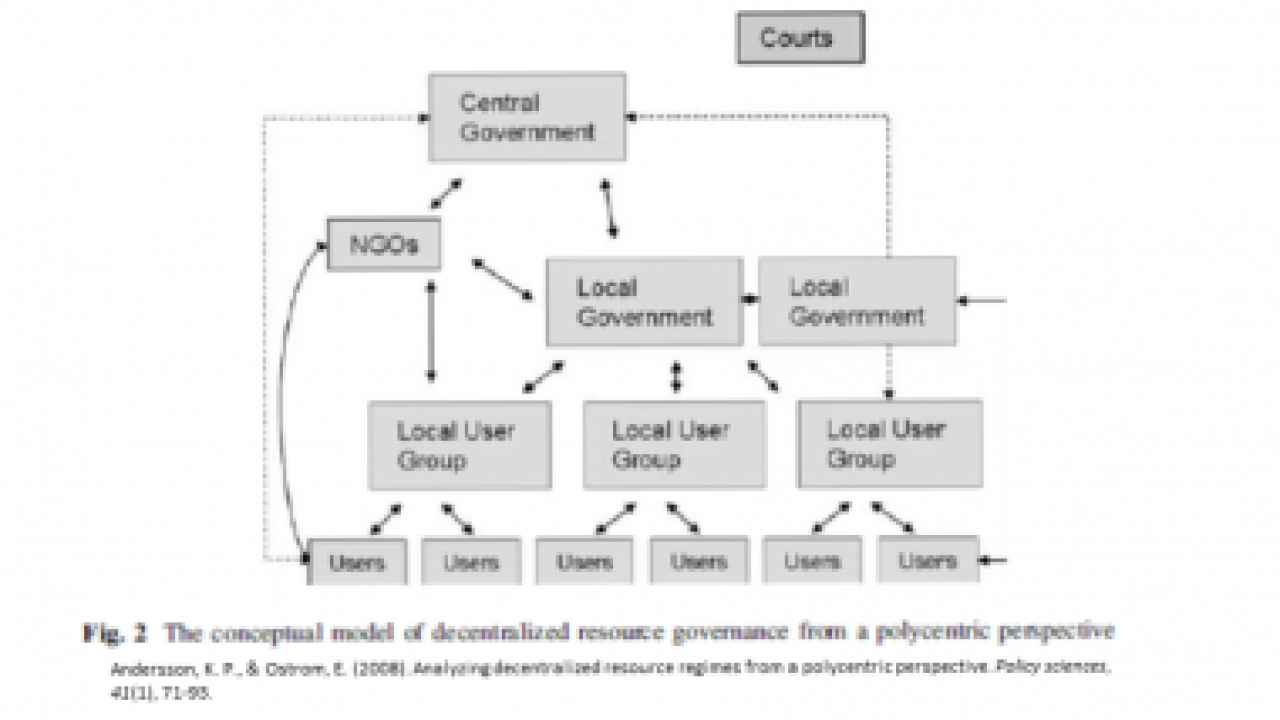 Polycentric Governance: A Concept Searching for a Theory

I have just returned from the 2017 meeting of the Midwest Political Science Association, where David Konisky kindly provided comments on our paper led by Jack Mewhirter (you can find the paper on the MPSA paper repository, which sadly is gated….), which demonstrated the existence of “negative institutional externalities” in the context of polycentric governance institutions. Negative institutional externalities occur when decisions made in one policy venue negatively affect outcomes in other policy venues. David commented that the existence of negative institutional externalities is a challenge to the normative assumption that polycentric governance is a superior governance arrangement to other types of “monocentric” or centralized approaches—how could this normative assumption be correct if introducing new venues has negative effects on the system?

This criticism reinforced my conviction that polycentric governance is a concept without a theory. At this point, I think most policy scientists, especially those studying theories of the policy process, agree that polycentric governance arrangements are the de facto reality in most policy subsystems in democratic countries and I would argue also in authoritative systems. This recognition is coupled with the normative assertion that polycentric institutions are better than some alternative, for example centralized, command-and control regulations. This normative assumption is rooted in Elinor Ostrom’s work, although I believe she would object to the simple caricature that much of the polycentric literature has recently exhibited.

If everything is polycentric, and polycentric is always the “right approach” to governance, then how can we compare the effectiveness of polycentric governance to some other approach? The literature has lost the idea that polycentric approaches should be compared to some other type of arrangement for example centralized structures. Alternatively, instead of reflexively assuming polycentric systems are “good”, we should be developing theories about the structure and function of polycentric systems that aim at identifying the structural configurations that work well under different contexts. I view this latter goal as more important.

To help develop this argument it is useful to compare the original and more contemporary definition of polycentric governance and realize that the early ideas about polycentric governance did offer a particular hypothesis related to the structure of urban governance. The original inquiry into polycentric governance is was V. Ostrom, Tiebout, and Warren (1961), “The Organization of Government in Metropolitan Areas: A Theoretical Inquiry”, which examined the provision of public goods in metropolitan regions with a multiplicity of local government jurisdictions. They offer the following definition: “polycentric connotes many centers of decision-making which are formally independent of each other (p. 831).” Drawing on Tiebout’s ideas about markets for public goods, one hypothesis in the 1961 paper is that polycentric systems are better at providing public goods than consolidated systems because citizen-consumers can vote with their feet and choose to reside in local jurisdictions that offer their preferred bundle of public goods and taxes(the so-called Tiebout hypothesis).  A second hypothesis in the paper is that any conflict among local units can be resolved via a “variety of formal and informal arrangements that may exist for settling area-wide problems(p.842).”

It is crucially important to recognize that V. Ostrom et al. were concerned about horizontal competition and cooperation among local governments in the provision of public goods, rather than the structure and function of multi-level systems. The contemporary literature on polycentric governance has moved away from the focus on horizontal competition/cooperation into the analysis of multi-level systems and the normative assertion that “polycentric is good”. This is partly a reaction to the reality of multi-level systems that exist to solve collective action problems that occur at different scales and emerge over time. Ostrom’s (2010) article “Polycentric Systems for Coping with Collective Action and Global Environmental Change” is indicative of the contemporary approach, which states “polycentric systems are characterized by multiple governing authorities at differing scales rather than a monocentric unit(p.552).” The article goes on to argue that for governing global problems like climate change, polycentric approaches are superior or at least complement overarching global agreements. This argument recognizes the importance of climate change actions being taken at multiple scales, including local and state government units. The paper then goes on to describe the benefits of polycentrism (e.g.; enhancing learning, cooperation, and adaptiveness), examples of multi-level efforts for climate change (e.g.; state and local initiatives), and some of the potential problems (e.g.; inconsistent policies). She calls for more research on how to reduce the problems in order to maximize the benefits.

Of course the hidden and shamelessly self-promoting agenda of this blog post is to argue that a theory of polycentric systems is beginning to be developed, name the “ecology of games framework” that was first outlined as theory of the policy process by Lubell (2013). The EGF builds on the metaphor offered by sociologist Norton Long, and has been developed in collaboration with my co-authors John Scholz, Ramiro Berardo, and Jack Mewhirter with contributions by a wide variety of other researchers. Critics of the EGF have claimed that it is just a renaming of polycentricism. My response is that the EGF is a theory of polycentric governance—we completely accept the idea of polycentric governance and try to provide hypotheses about the structure and function of complex, polycentric systems. Institutional externalities are one hypothesis that has received some good empirical support. But there is an entire lifetime of research that is needed before the theory will be fully refined and tested with links to policy outcomes in many systems. As that research enterprise evolves, we will hopefully get more answers about which normative claims regarding polycentric governance are supportable.